John’s Background Switcher is a freeware software utility which does what its name says: It automatically switches your desktop background periodically. This article will be the first in a series about useful tools I’ve had the pleasure to have experience with. I expect these will mostly be about software / gadget related stuff, but we’ll see. This won’t be an in-depth review or comparison with other similar utilities. It’ll just be about why I’m using it and how I’m using it. Basically a short spotlight with some useful tips & tricks. For those wondering, it is Windows only.

Why am I using it?
I tend to enjoy utilities which have a lot of features even if I don’t have a direct need for some of the features. John’s Background Switcher has a bunch of features and offers them in a pretty intuitively way. The main reason I have been using it for a number of years is that it allows you to very flexibly choose from which source you want to cycle your wallpapers. You can in example select a folder on your drive which has all the wallpapers you want to cycle and have the program cycle through them. The really neat thing is that there’s a number of possible online sources you can use (Flickr, Picasa & RSS feeds in example).

Tips & Tricks
If you just want to use your own wallpaper collection you can just use one of the Dropbox, Picasa or local folder sources. I haven’t used those extensively as I prefer the diversity of having an online source which will provide new wallpapers regularly. For that purpose I tried using the RSS source feed initially. That didn’t go so well. In my experience there aren’t that many RSS feeds that offer high enough quality pictures to really be useful as a source. A better alternative however is the Flickr source, which is extremely versatile and can get you pretty much any picture from the Flickr site as wallpaper. Note: There are a number of other sources which might be useful, I haven’t tried some of them recently.

Here are some tips (mostly for the Flickr feed):
– You can add a source that’s based on a Flickr ‘Group photo pool‘. Flickr basically has groups which generally have a specific focus. So if you for instance want high quality landscape’s, look for a Flickr groups that only admits those kinds of pictures. There are even groups focused purely on wallpapers of certain sizes.
– It’s also possible to add a source that’s based on a specific Flickr user. So if you find a very good photographer or simply a user that shares your taste, you can add his pool of pictures (or a specific subset of his pictures).
– Once you’ve selected a Flickr source, you can then choose to only show in example the top 500 pictures of that pool. This allows you to make sure that you only get the very best pictures from in example a very big group as your wallpaper.
– Another options is to filter by tag or search text, which can also be applied to a source that simply gives you all pictures on Flickr. Very powerful. Especially if you have a particular resolution you want, which you can set as tag or as search text.
– You can have multiple sources active at once. So for instance, you can simply add your own local folder + 10 flickr groups + whatever other sources you want and have the program choose from one of those randomly (see screenshot below). 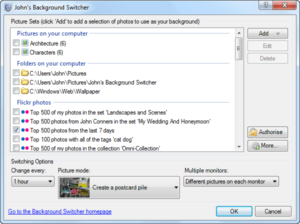 Interestingly enough I am now only using one source. That’s a Flickr feed based on “Everybody”, “Top 500 pictures” and with a filter on the tag “1920×1200”. This is working pretty well so far to continually get great new wallpapers that are also the right size for my desktop. For some more tips & tricks, check out the developer’s blog: John’s adventures.