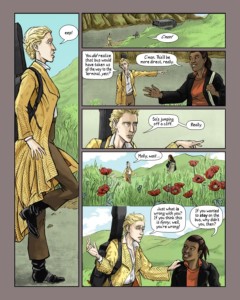 I’ve read a number of online graphic novels / webcomics and dicebox by Jenn Manley Lee is one of the most original I’ve come across to date. This article will explain what caught my attention. It will be a relatively short article as I feel I would need to do way more research to review it thoroughly. Do note that it’s ongoing at the time of this article so don’t expect to read it all at once. I’ve read it till this page of book 2 at the time of this review. It will be a four book series and it has a once a week update schedule (which it doesn’t always keep to).

First of all dicebox has a very unique way of telling its story. It starts you off with two characters you know nothing about and just gives you pages upon pages upon pages of dialogue. A lot of that dialogue is often pretty mundane stuff or things that don’t really make much sense because you lack context about the world / who they are. Interestingly enough this worked for me as it’s done in a way that made me more curious about the world they are living in and it made me (eventually) care for the characters. This did take bit of time and investment initially though. So don’t give up immediately, unless you can’t take lots of dialogue / build up time, as then this is definitely not a comic for you.

What’s also an interesting mechanic is that it skips parts of the story. And most of what’s skipped, at least at the start, are the action scene’s. This means just when you are getting the hang of it, you get dropped in another situation in another time / another place and you are left to puzzle out what happened in between and who did what to whom. Do note that this means it has a huge amount of dialogue and relatively not much action. I’d personally recommend to read a chapter at a time as reading single page updates is not that interesting due to the general slow pace.

Another aspect of the way the story is told, is that a lot of the back story is filled in very gradually through the chapters. Initially I thought both main characters, two female factory workers, were not that interesting, but especially Griffen really became a character I was very curious to learn more about. Also if you are a reader who enjoys complex interaction between characters, multiple layers of goals that characters are trying to achieve and character growth, you’ll definitely enjoy this graphic novel. The relation between the two main characters (Griffen and Molly) is especially complex and the author does a good job of exploring their relationship and the emotional ups and downs of it

The last aspect of the storytelling is the world building. As often done the story slowly grows in scale from just the two main characters in a particular setting to a storyline that has more impact on the world. This introduces you gradually introduce to more of the world and it’s complexities. What’s pretty impressive is that it manages to do this while staying focused squarely on the main characters. And it’s done in such a realistic way that it didn’t break my immersion in the main characters story. I think this partly because you are not handed explanations, but you have to figure them out while experiencing the story with the characters. 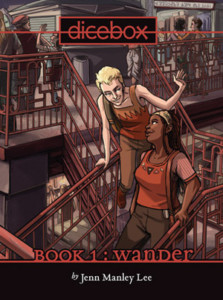 The story is set in a science fiction / futuristic world where travel between planets has become possible. It’s quite original with all kinds of nifty inventions and interesting (cultural) concepts in a future society. I won’t tell you more than that though so you can experience it yourself. The art / drawing style is pretty good. It has its own feel and is consistent throughout the story. I wouldn’t call it the best I’ve seen, but it’s definitely good enough for me. And I’m no expert on what makes good comic art anyway.

Anyway, the only real negative I had while reading it is that it’s pretty slow at times and that the amount of dialog was even too much for me at times. I’m pretty sure I’ve missed nuances I should probably reread. If you’re interested in supporting the author, the first book is available for sale at this store. Oh and the story is definitely intended for adults with all kinds of mature theme’s going on.