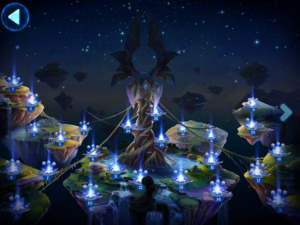 One of the world trees (not yet lit).

God of Light is a physics puzzle game that I finished a few days ago. It’s an enjoyable, relatively short, game that seems to get new levels periodically (it has 125 levels right now). The main reason I’m posting it here is that I ended up enjoying the mechanics quite a bit, even though it wasn’t too addictive (I got bored after every 10 levels or so). It’s out on Android (HD version) and iOS. I played the android HD version (1.2) and finished it a few hours time, so I didn’t find it very difficult. The game was made by Playmous and is now priced at 50 euro cents.

On to the review
The name is very fitting. You control a single light source, appropriately named ‘Shiny’, and your goal in the game is to bring light back to the universe. This is done by lighting up a ‘Source of life’ every level. And by lighting up 25 ‘Sources of life’ you light up can bring light to one big part of the universe. Neat. The graphics are, as you can see to the right, pretty good. I especially like the level selection screen which is very thematic for each separate world. The levels themselves further dive into that theme and are pretty although none of the levels resemble anything familiar (so you always feels out of this world). The lighting effects which are of course pretty important, look nice.

Each level starts with just Shiny emitting a single beam of light that you control. You can use that to light up and thereby activate objects in the level. There are multiple object type that each have their own characteristics. The most basic object type for instance is a mirror that redirects your beam. And every 10 levels or so you get a new toy to play with. This is one of the strongest points of the game in my opinion! The light mechanic itself is pretty interesting. Each level starts off very dark, but slowly becomes more lighted up as you activate more objects. Once activated some of the objects can be moved or reconfigured to for instance redirect the light at a different angle. This part is never truly difficult as all objects start in a fixed place, so you just have to play around with the light until you get everything to light up. 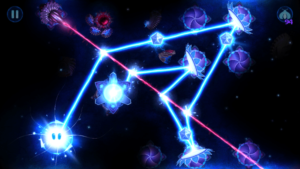 One of the later levels in the game.

One of those objects to light up is the endpoint of the level, the ‘Source of life’. Once you light this up, you can finish the level. However there’s also a sub goal of finding a firefly each level and a sub goal of lighting three crystals and the endpoint at the same time. Finding the firefly is generally pretty easy, you just have to be aware to look for it (which I can highly recommend doing immediately for each level). Lighting up all three crystals however can be genuinely challenging at some levels (for this you generally need to activate all objects). You can use the fireflies you collected earlier to get hints, which is a pretty well done mechanic. One of the reasons solving some levels can be a challenge is that the beam of light can be quite finicky to control. It can shine in more than 8 directions, so you sometimes have to really micro manage at what angle it’s shining. Still, most of the levels can be completed with three stars by just lighting up every object and then messing around a bit, which meant that I got bored after awhile with the game and ended up taking a number of plays to actually finish it up.

The Achievements. These are decently done. They are not very creative, but effective. You get most achievements simply by playing through every level and there are some extra one’s for finding all crystals or all fireflies in a world. However, there’s one achievement which involves basically speed running the puzzles as you need to finish within a certain time on all levels, which really doesn’t fit with this genre of game. And from what I can tell it is also pretty hard to get, so that’s a really silly one to include.

All in all: Even though I stopped playing for a while after every ten levels or so I can still recommend this game. It’s mostly due to the diversity in level design and that the difficulty isn’t too extreme, so you never get stuck with just the same mechanic for too long. And I generally enjoy interesting mechanics like these one’s. Final note, it reminded me of this old classic: Aargon. Hopefully that will get an Android port eventually as I’d definitely recommend that game over this one.