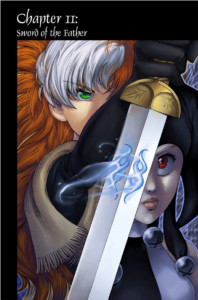 The reason I like Flipside as a webcomic is that it’s one of the few webcomics that really felt different / unique to me. I’ll go a bit more detail in the rest of this review, but the short summary is that it has unique characters, a dark fantasy setting, a strong focus on relationships / dialogue, lots of twists and turns and it isn’t afraid to be sexual / deviant. For that last point I’ve added the ‘Not safe for work‘ tag to this post. Flipside has run since 1999 and currently (2015-11-01) consists of 44 chapters (containing 1530 pages). It was made by Brion Foulke and doesn’t seem anywhere near finished. Also as a note: I read some other reviews and Flipside isn’t considered a very good comic by most of the one’s I read and I can definitely understand their points. I’ll try to discuss some of those as well. Finally, here’s the recommended starting page for new readers.

For me the first most noticeable thing are the characters; for instance the main character (Maytag) is a nymphomaniac, bisexual jester with her personality being dependent on what clothes she wears. What especially made her interesting is her jester personality where she’s extremely strong-willed, friendly and able to speak up about anything (and that’s just the first layer). One review notes that Maytag is too perfect / strong-willed and that her characters flaws only exist in theory. I think that’s what makes her such an engrossing character, she has some flaws and is conquering them through her own resolve (which is shown regularly as being tested in the comic).

Not just an action adventure.

In that sense she’s a very classical hero, in that she (and Bernadette) are beacons of light in a very dark world. It can make her a bit hard to relate to, but that’s not too bad, as she continually manages to surprise you with how she reacts to situations. Another nice touch is that most characters, especially the bad one’s, tend to have very interesting powers. These powers aren’t simple powers like ‘super strength’ but complex and / or dark one’s that often come with a price / some kind of drawback. One character for instance can see people’s weaknesses which makes him very disillusioned. There is also character development going on, which often is pretty psychological / deep, which is something I tend to enjoy. Interestingly enough out of the good one’s, Crest and Bernadette are the characters I’m least invested in as they are the most staple one’s. Crest especially becomes a very minor character for some time and is only now coming out of the wood works again. Luckily there are some very interesting bad guys / side characters that are doing all kinds of stuff with world-wide repercussions.

The main story line revolves around Maytag and Bernadette and their personal goals in life / relation with each other and other characters. The author describes Flipside as a romantic fantasy adventure which mainly tells the story of these two women and that’s definitely pretty accurate.

There is a lot of focus on their relationships / romances, which is pretty interesting. One of the weaknesses of the webcomic is that their other personal goals aren’t that interesting and that it takes hundreds of pages to take even the smallest step (which is a few years in real life). The reason I stay interested is that what is happening in a specific chapter is generally action packed and / or a small reveal of some of the larger schemes going on. And mind you, action packed doesn’t mean fighting all the time, quite a number of situations get resolved by bluffs / threats / wit or seduction instead. One thing to note: Some reviews talk about plot holes in the story, which I feel is correct, but that’s not something that bothered me while reading it due to all the interesting stuff happening.

Another thing which I really like is the world building. The dark fantasy world itself isn’t that unique, but there’s a lot going on with magic items / portals / illusions / the culture in the world that manages to keep me interested in finding more about the world / how it works. For instance in the current arc Maytag is trying to get into the ‘Dark room’ which is protected by multiple layers and to cross each layer there is a mental challenge that you have to beat before you can advance. And what will be at the center? Another plus of dark worlds is that they tend to be a bit more realistic.

People can actually die / get hurt in this story and they will (it’s not very frequent though). Finally the deviant stuff. Flipside deals with all kinds of sexual situations / tendencies and also some non sexual deviances (i.e. cannibalism). I’m glad to see that there’s a pretty popular webcomic willing to deal with these pretty seriously. Also note that it’s not extremely bloody graphically and the cannibalism chapter is probably the worst section of the comic (for now).

The art style is pretty good in my opinion, but if you’re looking for really great art, this is not it. It’s also mostly in black & white, which is something I don’t mind / got used to. I’ve seen the art style described as ‘anime’-like, which is a fair impression. One thing which annoyed me personally are the ‘Intermissions’, roughly 10 or so pages between each chapter that are much worse art wise and deal with i.e. ‘funny’ side stories and reader questions. While they could be interesting if you want to know some more details about the comic, they really break the story immersion when you are reading consecutive chapters. There’s also a ‘Book 0’, which is a prequel of Flipside. It has 500 pages and it was written before Flipside and it’s worse art wise (but definitely worth it story wise). I would still only recommend reading it if you are enjoying the main story. Another thing to be aware though that it’s already going 15 years and I have no idea how long it will go on. I noticed I’d forgotten most of the earlier chapters by now, so if you want a fast resolution, this comic is not for you.