Deep Dungeons of Doom is a fun little action rpg set in a high fantasy world where you fight through dungeons to save the world. Don’t expect a very interesting story or a lot of depth as this is definitely a casual game. It is from MiniBoss (an independent game development group) and is available on Android, iOS and Steam. I played the android version (1.0) on my phone and paid for it (it’s 2$ currently, I think I got it for 10 cents on a sale). One nice touch is that in this version all in-app purchases have been removed (I never played it with in-app purchases so I can’t really compare). 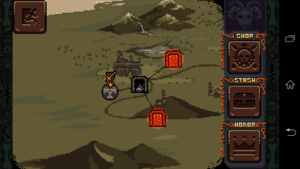 The overhead map at the start.

The basic game play is that you are fighting one opponent at a time and that you have to time your attacks and blocks correctly to beat them and advance in the dungeon you are in. So, yeah, it’s a rhythm game. You get to explore multiple dungeons and each dungeon consists of floors that contain enemies (and possibly item’s), shrine’s (which give buff’s), bosses and sometimes even NPC’s. There are three playable characters (crusader, witch, mercenary), each with their own skill tree and a special ability (healing, regenerating magic, harder attack). During fighting in the dungeon you also level up your character, which allows you to choose a stat bonus, which helps in specializing further. All this works together nicely as they do end up playing quite differently and you can even try out different strategies with each character. 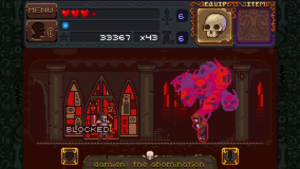 One of the bosses.

The combat is where this game shines. It was quite fun to figure out how to deal with each specific monster and there was a pretty decent diversity of those. I do think specific monsters should have had a bit more diversity in as they generally behave exactly the same each time you meet them, which gets very predictable (and therefore boring). You can use the item’s you find (one wearable, one usable); this is another point at which the game is quite good as there’s a good diversity of interesting items to use. If you survive the dungeon you can store the item’s in a stash and you can also buy item’s in a shop (which is pretty useless). I enjoyed the item diversity and the mechanic that you lose your items if you die; this made it a lot more tense to survive, especially if you have a rare item on you.

The story is presented by a bit of story (graphic & text) before & after each dungeon. I found this pretty well done, although personally I really didn’t end up caring about the story line; which is a pretty standard one and pretty short. Your experience with it may vary though as the game makes a lot of effort to present it comically and that just didn’t click for me, so I skipped through most of it. One very nice detail is that some of the things you do in the dungeon can influence the story after the dungeon, which is something I really like to see. Another one is that each dungeon has a bit of info and that there’s even a monsterpedia; which is always a nice touch. Minor note: Some of the dungeons have precondition (like retrieving a certain item) you have to achieve first; this was never very hard, so for me this added to the flavour. 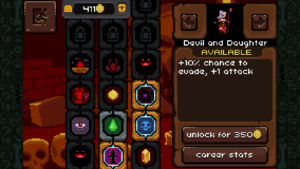 They get much more expensive.

The skill system is pretty good. You have seven tiers of three skills for each character and you can have one skill active in each tier at the same time (so a maximum of seven skills active at once). This gives you a decent number of possible different builds. Naturally some builds are way superior to others, especially when combined with items, but figuring out which one’s are the best one’s is part of the fun. Each skill costs money to unlock, which is a nice mechanic, although I feel they are a bit too expensive. Even after having finished all dungeon related achievements I’m nowhere near unlocking all skills (probably at about 50%). And some of the higher tier skills aren’t really that interesting, so there could have been a bit more diversity there. 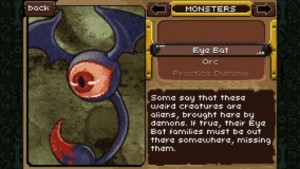 Most of the Android achievements are pretty reasonable; the only one’s that are grindy are getting to level 666 in the endless dungeon (which you unlock by finishing the game) & buying all the skills. Personally I didn’t bother with those last one as that’s just grinding way past the point at which it was still enjoyable for me. Part of the reason is that once you know all the patterns of the enemies, there’s not much to surprise you anymore. What is really enjoyable though is that each dungeon has a secret and that there are a few secret endings. I would recommend looking up these; they are quite difficult to figure out trial wise; once you know how to do them they are pretty well done though. At least for me it was a reason to replay some of the dungeons again as the secrets also slightly change the story in each dungeon.

The endless dungeon is slightly different with regular random boss battles and slightly different attack patterns (only on the bosses it seems). I did do the achievements associated with the endless dungeon, but that was quite a chore; so I’d only recommend it if you are still enjoying it. If you are going to do it, here is the guide I used. Also, I’d recommend saving up your tokens (you get those for finding the secrets) so that if you do happen to die, you can continue on without having to restart. I ended up using one token somewhere around room 600.