Circle currently rates 6.0/10 on IMDB, which in my opinion is too low for this clever horror & science fiction movie about fifty strangers suddenly forced to choose who among them will live. I’ll probably include a few very light spoilers in this review so if you want to watch it completely unspoiled, stop reading after this paragraph. I’m not sure how many of these kinds of reviews (meaning TV Shows & Movies) I will do as there are naturally a lot of those out there, but this one was a nice one to try out a review with as it’s in my opinion underrated. Anyway, onwards to the review. 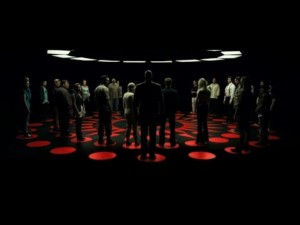 First of all, I was intrigued by the basic premise of the movie: Fifty strangers suddenly have to choose every two minutes which one of them gets to live. The movie is mostly about the interaction between these characters, their personal values and how far they are willing to go to live. There is a lot of discussion / backstabbing / prejudices / mind games / group forming and even sacrifices as some people try to save themselves and others prefer to save the weak. One of the main reasons this worked for me is that someone has to die every two minutes, which immediately sets the pace for the movie and kept me nicely engaged throughout. All in all, I guess I was more engaged by the game show like element about who would win / what’s going on than identifying with each character (and there are fifty characters, so that’s a lot).

Still, I didn’t think the characters were unbelievable as I enjoy in movies if you can feel like the characters are not acting completely unrealistic in the setting they have been placed in. In this movie I felt that was done pretty well. Some characters are pretty shallow / prejudiced and some act idiotic. Also the back stories about each character are very short and discussions are about superficial moral quandaries. However, this didn’t feel at all unreasonable considering they are fifty strangers suddenly put in this setting & under so much pressure. One thing which does feel unnatural is that they stay too calm in terms of letting each other talk & not freaking out, but I could forgive the movie for that as it’d probably be way worse to watch otherwise. Also sometimes group decisions seemed pretty odd, but as I said before, it’s a high pressure situation and we don’t really know a lot of the characters very well. 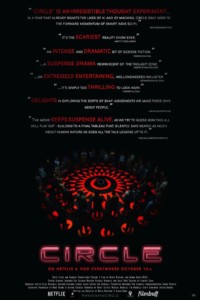 The way the story progresses was pretty good. Initially it’s about targeting specific kinds of people who ‘deserve to live less’, which slowly changes into the group dividing in two factions (save others, save themselves). There’s also a lot of discussion about why they are there / if there’s a bigger meaning behind what’s happening. To my surprise the movies managed to keep the suspense about who might live going until the end; which was nicely done (there’s no clear main character which is a nice touch). I was also pretty happy with the ending, which felt right. I’ll spoil it very slightly by saying it wasn’t an open ending which gave no answers at all; which can annoy me in some of these kinds of movies. All in all this movie makes the viewer think about what he’d do in that situation / what human nature is like, which is always fun. Warning: If you completely don’t like movies in which a lot of talking happens; this might not be for you.