Adding role-playing (and fantasy) elements to a wargame is not an easy thing to do well. To my pleasant surprise this game set in Britannia in the Arthurian era managed to make it into a really enjoyable and enticing experiencing. Mind you, its not a carefully balanced or easy experience. Instead it’s filled with lots of interesting things to do, lots of difficult challenges to face and an enormous amount of atmosphere / lore. For me that was enough to let it earn it’s spot here. 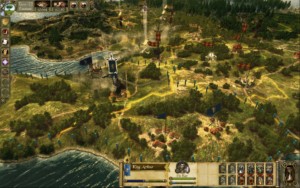 This map can get pretty crowded.

In this review I’ll go pretty detailed into the mechanics of the game, so if you don’t want to be spoiled about how the game works, don’t read past this paragraph. If you want more of an impression of the game without reading all the mechanics, here’s a Tyrant old faith and a Righteous Christian long play. I personally like checking out the first page of these to get a quick impression of whether it’s my style of game. Or you could just read them if you don’t intend to play as they can be fun reads. Note: There’s also some DLC for the game and multiplayer; I didn’t try any of those, so I don’t have an opinion on those. This game is from 2009 (by NeocoreGames) so it was six years old when I played it in 2015. For me that ended up not being much of a barrier as I got quite into the game after the first hour or so and it held up pretty well in my opinion in terms of graphics. 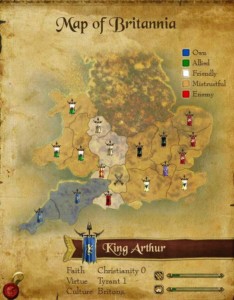 The scope of the game.

When I say wargame, it’d be more accurate to describe it as a mix of a grand strategy game and a real-time strategy game like in the Total War series. You play as King Arthur on a giant map of Britannia. That map is divided into different provinces, each of which you can conquer. One province has one or more towns in it and has other buildings (i.e. churches) which can give benefits. Part of the grand strategy part of the game is managing your provinces economically, building your armies and assigning governors. During the winter you can’t move your armies, but you can do research (there’s a whole research tree). You can also pass laws (another tree) and you can build structures that give bonuses in any of the strongholds that you own. When it’s not winter you move your armies around to do quests, conquer cities and fight other armies in tactical real-time battles (with a pause option). You can have multiple armies, each of which can have up to 16 units in them. Recruiting new armies / replenishing your troops costs quite a bit of time, so ideally you do that during the winter. Note: There are also hero units (knights) that are a knight with a small set of elite soldiers; there can be multiple of these in one army. Each one of these takes up two slots instead of one. 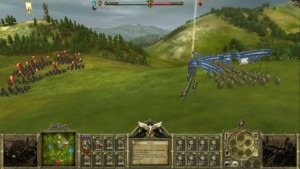 The tactical battles are pretty decent, but not the game’s strongest point. Generally they involve capturing one or more victory points and holding these for some time or destroying the enemy army. You can use formations, spells and skills during the battle and some of the spells and skills are extremely overpowered. Cleave combined with Sidhe Pathways is an example. Personally I didn’t mind this as I enjoyed being able to completely destroy huge armies with a few super units. And I was playing on the highest difficulty level which involves a very large numbers of enemy armies, so I got very bored with all the tactical battles I had to do. Note: I’d recommend not using the auto battle option; my experience with it wasn’t positive. 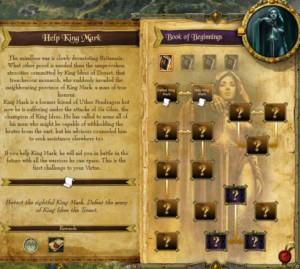 The game is divided into multiple acts and each act has multiple quests you have to finish to progress. Quests are in my opinion one of the main reasons the game shines as it gives the game a sense of progression / depth. There are generally multiple paths you can take in each acts quest tree and some quests are initially hidden waiting on a certain situation / precondition to occur. Additionally there are optional main quests and even optional side quests (some of which keep occurring). A lot of the quests revolve around fighting a certain army or conquering a certain territory, but there are also a lot of adventure oriented quests. In an adventure one of your knights goes through a small story line in which you get to answer multiple choice questions. The one’s you can choose are dependent on your heroes skills & your king’s beliefs. And the result of such an adventure can have all kinds of rewards / effects on both the adventurer and the kingdom. These add a lot to the atmosphere as they generally add a lot of lore and can have dire consequences (you can i.e. also end up in an army battle). 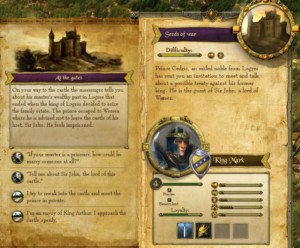 The first of many choices in this adventure.

Another neat things of these quests is that the choices you make there have an actual effect on the alignment of your ruler. This is part of the alignment system in the game which goes between two axes: “Christianity” versus “Old Faith” and “Righteous” versus “Tyrant”. These are put on a X and a Y axis, so there are four possible combinations you can strife for. And having strong alignments one way or the other gets you bonuses, in example extra unit types, extra spells or extra kingdom benefits. These bonuses are so big that it’s a really bad idea to not go for a specific combination and try to be so consistent as possible in your choices to go further that way. Personally I feel that’s a pretty good approach as it stimulates consistent role-playing within the game world. It would also allows for a fair amount of replay ability as the different combinations allow for different overpowered combinations. I don’t exactly remember how predictable the choices were in the game, but I think in general it was pretty clear what the effect of your actions would be. 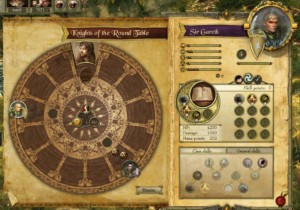 Note the room for queens / ladies.

Regarding the knights and their part in the grand strategy game: You can recruit more knights along the way. Which one’s you can recruit are dependent on the choices you make and each of them has their own faith, cultural background, starting skill set, some positive / negative characteristics (i.e. Stern) and some innate attributes (i.e. how well they can adventure or command armies). When you make choices in the game, those choices also have an effect on how your vassal knights perceive you. You don’t want their loyalty score fall too low, so you have to manage it by in example letting them govern provinces or marrying them to a beautiful princess (with their own characteristics). And provinces that are of a different culture / faith might not like their governor or someone you want as governor might not be very skilled at that. All in all, it’s not as detailed as true grand strategy games, but it had a satisfying amount of depth in my opinion (oh yeah, you can also capture enemy generals / have your own knights be captured). 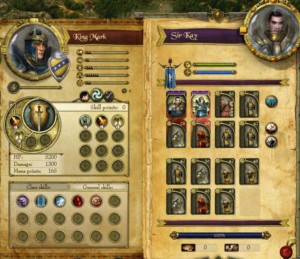 You will see this screen a lot.

I should add to the above that the game absolutely doesn’t try to be historically accurate as it has a lot of fantasy / mythological elements in it. Your heroes can collect powerful magical equipment ( even some unique artifacts) and learn spells to cast next to being able to learn skills that can be quite incredible as well. In terms of units there are a number of regular units next to more fantastical mythological units. The same applies to the rest of the game, some stuff is pretty mundane, like quelling an uprising or fighting catholic armies. The next moment however you can be doing a quest where you have to do stuff with the Sidhe in an alternate dimension. All in all I was really impressed by the depth and amount of lore present in the game. I should probably also add that your heroes and units can level up in the winter, which can give heroes extra attribute points, improved skills or even new skills (each knight has a class which governs which skills are available). Even units have a few (sometimes unique) skills they can acquire when they level up further. Note: Knights have to stand next to each other to swap equipment; that could have been made easier. 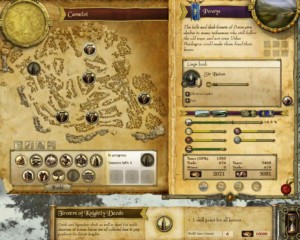 So what else is bad about the game? The user interface, although decent, can be slightly confusing at times, so that could have been better. Another negative point is that you can get screwed over by quests that trigger at a certain time. For instance some quests spawn multiple big armies after a certain amount of time, so if you take things too slowly you could end up in a place which is almost impossible to recover from. This can can also happen if you make fundamental mistakes with your armies / adventurers / economy. I’d definitely recommend keeping a lot of different save games at different times. And of course, the balancing. Some powers are extremely over powered and when used by the AI are only beaten efficiently by figuring out or looking up even more over powered one’s yourself. Finally, at the highest difficulty level the only way to beat the game is to make use of these as near the end there are huge respawning armies thrown at you continually. The game really became a chore at that point.

References
– Longplays: A Tyrant old faith and a Righteous Christian long play (only text and images).
– Artifacts, Knights, Ladies, Skills and Traits Guide. Direct download.
– King Arthur’s official forum. It seemed like I had to create an account to be able to see the older threads (which have all the information).
– GameFAQs forum.

One Response to King Arthur – The Role-playing Wargame