Linia is a minimalist puzzle, rhythm action game where you draw lines through multiple colored shapes. The catch? Each level has a predefined sequence in which you need to hit the colors and the level changes while you are trying to draw that line. Luckily the way in which the shapes behave is predictable, so you can plan for how and when to make your move. Still this means that this isn’t only a puzzle game, but also a rhythm action game as you often need to time the drawing of the line right (and be very fast about it!). It’s available on android (on which I played it) and iOS and was made by Black Robot Games. It’s version 1.2 has 73 levels now and the game costs 2 euro (2017-03-19). 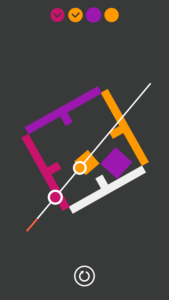 This is a rotating square.

Some more thoughts:
– All in all I really liked the idea and visual style of the game and I felt the level design was sufficiently interesting to highlight it here. However, the rhythm action part is its weak point. It often felt the fastest way to beat a level was just to try the right move multiple times in quick succession until you happen to get the timing right. Which for me can quickly change a relaxing puzzle game into an annoying one.
– The level design is pretty good. It’s quite interesting to see all the kinds of different things you can do with just this basic concept of drawing a line through multiple changing colored shapes. I would have preferred more levels that are difficult because of the puzzle instead of exact timing though. Apparently there may be more levels added on, so hopefully there will be more of those (or some extra mechanics).
– I got this for free on a google play sale and I probably wouldn’t have paid its full price for it as the game can be easily finished in 30-60 minutes. All achievements seem to be automatically achieved while playing, so that’s not really a reason to replay levels. Still, if you enjoy the concept it’s still not expensive.