My first deck build of an alliances summoner: Moyra Skylark of the Vargath Vanguards. She makes for a very interesting faction to play with lots of options and a very good summoner power. In this guide I’ll go into detail on what her ideal deck build looks like and how to play that build well. As she is an alliances summoner you can also put in Mountain Vargath and Vanguards units in her deck. I’ll include those but for now I won’t include Mercenaries. Summoner Wars is a game by Plaid Hat Games. It’s available on android / iOS / Vassal. 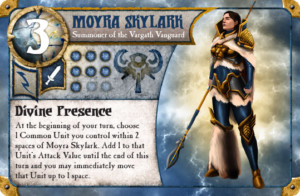 Moyra doesn’t have the tools (without Etch) to win economically, but she does have another way of gaining a magic advantage. Namely by trading her commons efficiently with the enemy units by making her units harder to hit or by making her units stronger. Because of this I feel deck building her should be mostly geared towards high health commons that can reposition easily. The idea then is to use your events and summoner power to gain such positioning that you can kill more of the enemy’s units then you are losing. Another key aspect of playing her well is to keep Moyra and her Crusaders near your other units so the threat range is as big as possible each turn (and don’t forget Change Form). Because of all this I prefer an aggressive style of play with her although she can be played to assassinate or even to play defensively (this would include defenders). Faction wise her play style reminds me more of the Mountain Vargath then the Vanguards although I ended up including way more Vanguards units then Mountain Vargath units.

Power wise I’m pretty happy with her. You can include sufficiently powerful commons and champions due to all the options you have. And her power / events / health and attack dice are all good enough. I’d probably place her as slightly stronger as the Mountain Vargath. Her lack of economic events / powers is the biggest weakness (not sure yet how to value Father Benjamin in this regard). Also, she can be assassinated, so take care not to over extend her. Especially as it’s pretty essential to have her near the action (and watch out with over using Divine Intervention).

Basic tactic and combo suggestions:
– Crusaders are very effective in combination with ‘Light’ units and your summoner power. This means you can have at least one unit each turn that’s hitting for two more dice than it normally can. Because of this you’ll always want to have at least one common on the board to boost each turn.
– It can be wise to build the first common of a certain type that goes into your hand. The reason is ‘Change form’. With it you can use that ability once it is in your discard pile and that can greatly increase your options.
– Remember that your summoner can’t use her power on freshly summoned units. So if you want to for instance have a Cavalry Knight move to the next vertical line and move 5-6 squares to the other side, he’ll need to be on the board already. This will make your movements a lot more predictable.
– As you can only attack with three units each turn an ideal scenario is to always have 1 common able to attack and 0 – 2 other (stronger) units. 0 can be fine because if you and the enemy both only have 1 common doing an attack per turn, you’re probably ahead as your attack gets boosted for free. 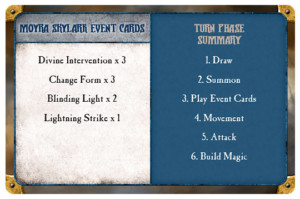 As you can choose from both the Vanguards and the Mountain Vargath there are a huge number of champions to choose from. However, because we are looking for an aggressive play style a lot of champions are just not that good. In the end I decided on Leah, Father Benjamin and Qayla. Leah because she’s insanely cheap and can go up to 5 attack value with a Crusader. Father Benjamin for his healing ability, relatively cheap cost and the three ranged dice with a Crusader. And finally Qayla as she allows (freshly summoned) commons to be transported directly into the action.

These are the champions that are also very good, but that I didn’t choose (mostly because they feel less aggressive):
– Sybil Swancott (huge synergy with divine intervention, but very, very expensive)
– Raechel Loveguard (two ranged attack with card discard if combined with a crusader)
– Luka (not aggressive enough of a champion, but always good)
– Jacob Eldwyn (same story)
– Growden (walls are not my primary focus here, but he can be good).
– Coleen Brighton (no synergy with Blinding Light or defenders, but benefits from Crusaders)

After more plays I might eventually replace Leah (she forces you to build magic to some extent which isn’t always that good here) and Father Benjamin (don’t have a good feel yet whether he’s really worth it). I’d probably lean towards trying out Raechel / Sybil as possible replacements (and not summon all three champions).

Common wise there’s a lot of choice as well. What I’m looking for however are commons that give Moyra an interesting extra option (with Change Form) and that are by themselves useful for doing what’s the biggest weakness of most factions: Movement for getting past or around enemy units / walls. Another criteria was whether they benefit from the Crusader’s ability that’s already on the board. Because of this the Cherubim are an auto include; they can by-pass units and they get up to three dice with a Crusader + Moyra. Incredible value for one magic. I also included a few Crusaders for if the first one dies (one more might be necessary against some factions). Honor guards are probably the most interesting include. The reason I included them is Qayla, them having three hitpoints, they can protect Moyra and she can actually do crazy move’s by becoming an Honor Guard with Change Form. I’d recommend only having one out at a time though. Finally 2 cavalry knights, 2 brute’s and 2 warrior angels. These are the situational units that can be either used for Change Form or their own. They all have at least two health and two dice (with Moyra’s ability). It might be better to have slightly less diversity, but for now I’m going with this. Note: Warden’s can also be interesting to use. 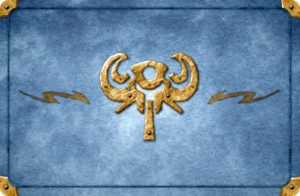 You can use ‘Divine Presence’ on your first turn so if you can make a strong first move it can be useful to be the starting player with this faction. If not, then I’d suggest going second as that will allow you to make more informed decisions about how aggressive you can be. Take care not to lose the Crusader early as you want it to be boosting your Cherubim. The defenders however are expendable and are perfect to be used to make the Crusader / Cherubim harder to kill. I’d also move Moyra forward early to extend your effective threat range. The wall is positioned perfectly really; you can be pretty aggressive early and still be easily protected from your sides. As with most aggressive factions don’t be afraid to use or build your events and to build some units early to have a bit of magic for reinforcing (but don’t build too much). If you draw Leah early she can become a huge threat. Regarding walls: Use them to create choke points or build them.

Towards the mid game you should be careful of not over extending. Especially when your opponent has some magic built. With all the high movement units and movement tricks you can pull it’s very tempting to go very deep in enemy territory. If that doesn’t pay off big time you might lose resource wise or get assassinated (using Blinding Light can make it a lot safer). Naturally if you can get lots of dice on the enemy summoner it can be worth it. In general I’d recommend a more slow positional push as Moyra doesn’t have a mechanism for getting a sudden large number of dice from a single unit. Every turn in which you are simply trading blows will probably be helpful against most factions. Change form can be very useful as an escape tool or simply to get Moyra in a place to finish off an enemy summoner / champion. If you are playing a more defensive game you can use the Cherubim for pressure as they can potentially throw three dice at a wall each turn. 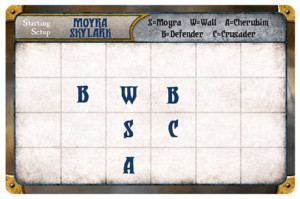 Towards the end game Father Benjamin is a trump card as it will allow you to compensate for the earlier wounds taken. I wouldn’t call him extremely strong though as his ability does cost magic and it won’t safe you if you are more than a slight bit behind. Aside from Father Benjamin try to keep making use of your summoner ability. If a game goes dozens of turns, you are getting an extra die every turn. Because of this be careful building your last few commons; if possible keep them in your hand or summon them so you don’t run out of them. All in all you’ll probably not summon all your champions in most games as using commons is so very effective with Moyra.

Match up analysis
I might do a faction by faction analysis eventually, but I’ll start this off with a few general observations. Factions that have an innate economic advantage and that (can) survive your initial onslaught are very hard to deal with. Factions with strong anti common abilities are also particularly devastating.


* SSCF = Secret Summoning cost formula = attack value + base health + 1 if ranged - (2 if common OR -3 if champion) - magic cost. I haven't included the worth of the ability as that's generally controversial.


* SSSCF = Super Simple Summoning cost formula = attack value + base health + 1 if ranged - (2 if common OR -3 if champion) - magic cost. I haven't included the worth of the ability as that's generally controversial.


* SSSCF = Super Simple Summoning cost formula = attack value + base health + 1 if ranged - (2 if common OR -3 if champion) - magic cost. I haven't included the worth of the ability as that's generally controversial.