Selundar’s Shadow Elves are one of the weaker factions in the game. However they can be quite enjoyable as they allow for some very aggressive play (and a very pretty color for the faction). The main reason I feel they are relatively weak is that they can’t deal well with heavy turtling. This guide will go into more detail on how to play them well. It will not include mercenaries for now or Alliances units. Those will probably be added in an update to this post once I have had experience with them. Summoner Wars is a game by Plaid Hat Games. It’s available on android / iOS / Vassal. 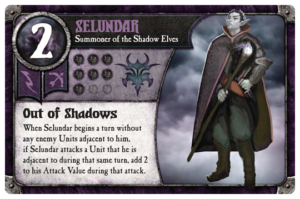 Basic idea
This is another faction with which you want to be aggressive. Except for Taliya and Into Darkness you lack the tools to gain a magic advantage. Luckily all your other events and a lot of your commons (Hunters especially) are well suited to assaults. Still, because your units generally are also low health you can’t really be trading units one on one (unless you have Shadows up), so you need to get an real advantage with your aggression. This is the big weakness of the faction, against a good opponent they will build a lot of magic to try to get a quick champion / more walls out and they will try to keep their summoner safe against your tricks.

Your level of aggression should depend strongly on your opposition / the starting position. In some situations it’s better to quickly build towards a champion (Hydrake probably) and use that as a mobile summoning spot for your aggression. Going fully defensive is possible, especially with your summoner power and Hydrake, but in most matchups that’s a recipe for losing slowly but surely. All in all, I feel Selundar is below average in terms of strength (I’d rank him as better than the Cave Goblins but worse than pretty much all other aggressive factions). He lacks an answer to strong economic advantages, lacks ways to remove or go past early walls / champions and has too many low health commons.

Basic tactic and combo suggestions:
– Stalking Advance and Summon the Night combo well with Selundar’s ability. Use these to be way more aggressive with your summoner and other ranged units.
– The same goes for Into Darkness (to remove blockers) and Stalking Advance / units with extra movement. This can also be used to do wall blocking. Into Darkness its main weakness is that it can’t handle commons that cost three magic.
– Hunters are incredible at getting a few extra dice in against a summoner as they can be summoned right next to whatever unit is attacking (or wall block). 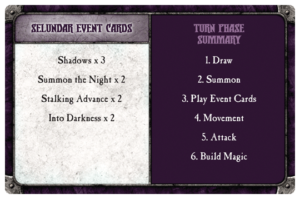 Choosing the right champions is not that easy. I really like Hydrake for being a big summoning spot, but other then that he doesn’t fit that well in an aggressive oriented deck due to his high cost. I still included him though. The other two champions I ended up including are Melek and Kuldrid. Melek and Xaserbane kinda fit a similar purpose and I feel Melek is the stronger one as he has one more health and the better ability. I’ve included Kuldrid mostly as a finisher and because he has three ranged dice. His ability is very annoying but I feel the deck really needs his strong ranged attack. I might swap him out for Xaserbane (for an extra finisher / alternative to Melek) or Taliya (one less attack dice for a better ability) if I get too annoyed by him.

Common wise I felt it was easier. The Sworsdman are a very solid common and I dislike the Scouts (Cannon Fodder) and Rangers (too costly to use its ability / too weak). This leaves the Blade Masters and the Hunter’s. The Hunters are quite expensive for their health (use a Swordsman if you just need two quick attack dice), however they are ideal for assassination’s due to you being able to summon them anywhere next to your units. I’ve also included the Blade Master, but I think I’ll mostly build them unless a specific situation appears in which I need to attack two different one health commons close to each other (or if I need its two health). 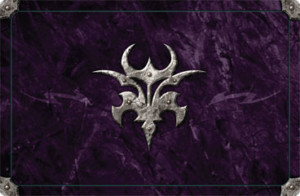 This is a faction with which you might want to go first. One reason can be that you’d otherwise lose too many commons at once, another is to use them aggressively or to kill them off yourself instead. Your starting position isn’t that good; especially the bottom-left Ranger and Selundar are too far from the action. And two of your Swordsmen are pretty likely to quickly get killed. In general I’d recommend killing off some of your own commons (basically anything but the Swordsmen). Partly because of Into Darkness, partly because a champion is a better summoning spot for your hunters, partly because your units are so fragile and finally because it costs more movement turns to move some of your units in a good position then to summon new, better positioned units.

Remember that if you draw a Shadows you can pretty safely be very aggressive with your units. Also, any early reaction you can force out (i.e. an extra common summoned) is a step towards being able to use Into Darkness / causes it to probably take longer for a champion to come out. Because of this same reason I wouldn’t summon new units unless it’s a champion / really accomplishes something useful. Definitely build magic aggressively so you can summon (or threaten to summon) a champion or hunter’s. And it’s because you don’t really want to be attacking when all three walls are already up. Selundar should also be going towards the front line’s, but just like with Krusk you don’t want to be too exposed unless it’s to do a safe four dice attack or an assassination. Finally, always watch out for those assassination opportunities, especially in the early game against an opponent killing his own units / with not that many walls yet. 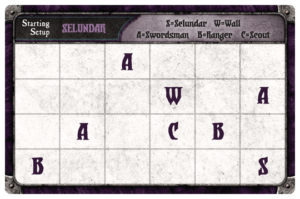 Towards the mid game an ideal scenario would be getting Hydrake out or getting an opportunity to throw a lot of dice on a summoner. Try not to get Hydrake stuck one on one with an enemy unit, but ideally he’ll get behind the enemy walls while still exposing only one flank. That way you can use him as a mobile summoning spot for a while and either overwhelm the walls or get a two-pronged assault going on the summoner. Stalking Advance, Summon the Night and Into Darkness are your key events in this stage to make stuff happen in general. Try not to use these needlessly / give away that you were forced to build them as a Shadow Elf player is much more predictable once these have been played / built. Economically the only real way to outlast your opponent is to be aggressive and because of that manage to get better trades off (for instance forcing him to summon a champion and instant killing that from three directions).

In an end game situation your units are pretty ok. Naturally if you still have some of your events left, Selundar can do a huge amount of damage with his ability. Other than that there are no really big advantages you can capitalize on with these champions / common’s. Also don’t be too afraid to build a champion with this faction, you are very likely to not get all three out as you also need the Hunters / Swordsman to assassinate.

Match up analysis
I might do a faction by faction analysis eventually, but I’ll start this off with a few general observations. Watch out for factions that can turtle really well. Also factions with high health commons that cost more than two magic are really obnoxious as you can’t use Into Darkness on them.


* SSCF = Secret Summoning cost formula = attack value + base health + 1 if ranged - (2 if common OR -3 if champion) - magic cost. I haven't included the worth of the ability as that's generally controversial.