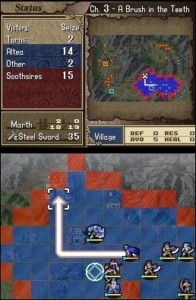 This is a review of Fire Emblem: Shadow Dragon, a well-polished fun game for tactical rpg fans. I played it on my Android Nexus 5 using a Nintendo DS emulator (DraStic) so this will not be an accurate review of how it plays on a Nintendo DS. Note: the game is a remake of an earlier NES title, which I never played. I can highly recommend using an emulator as it was a problem free experience and you can save / load at will. Also useful to note is that I haven’t played that much tactical RPG’s (although I did play a lot of turn based tactics games) so I can’t compare it extensively to similar title’s. The game took me about 32 hours to complete (this is without reloads, so actual time played is probably closer to 40). The game was made by Intelligent Systems.

The difficulty
One thing I feel I should highlight is the difficulty level I played at. I didn’t know what to expect so I played on the third difficulty level (wanting some challenge). The first few levels this was pretty hard with for instance the boss counter attack instantly killing characters if I wasn’t lucky / extremely careful. After that it was a good level of difficulty until the last two battles where it became pretty hard again (especially the last level, where I thought for a while I might simply not be able to kill the boss with my characters (I didn’t have a particular character which is very effective against it)). Without an emulator I’m sure I wouldn’t have finished the game (as reloading was pretty frequent at that stage due to major characters dying). Therefore I wouldn’t recommend this difficulty level unless you are playing on an emulator and / or are an experienced turn based tactics gamer that wants this kind of challenge. Note: Without some of the spells (Warp, Barrier, Recover) I wouldn’t have been able to finish the game, so make sure to take the time to figure out how these work.

The story mechanics
The story itself is a pretty generic ‘save the world’ one. However, the mechanics used to convey it were pretty enjoyable. First of all after each level you get nice looking cut scenes with a small amount of text. And some of these are pretty dramatic / well written. Another very nice feature is that the characters can talk to each other during the missions. This adds to how much you care about the characters and you should really pay attention to which characters you bring on particular missions as that might give you extra conversation options. Another small detail is that you can talk with a number of enemy units, generally to recruit them. This often requires a specific character from your side to do the talking, which is fun to figure out. Finally: You can visit villages on the map where hints can be found / people can be recruited / more story is told.

The battles
The turn based battles is naturally what it’s all about. I mostly enjoyed these as the level design is pretty clever. There’s a good diversity in map type’s, the kind of opponents you are facing and there are often specific villages / treasure chests you should get to before the enemy does or you lose an advantage. Another feature I generally like is that enemy reinforcements can show up, which often changes the battle flow. These *can* however completely screw you over, so I doubt I would have enjoyed these if I wasn’t playing it on an emulator (in which you can instantly load to the previous turn). The fighting between units is a rock-paper-scissor mechanic between lance, axe and sword which worked well. There are also ranged units (archers / ballista), flying units and magic units (dragons, priests and mages) which all in all made for an excellent diversity of unit types. In my play through I ended up mostly using two priests / mages, all the flying units (leveled up as much as possible) and a few different infantry units (with one Ballista, which is very useful). 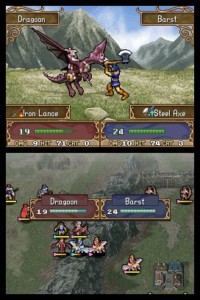 Leveling your characters is enjoyable. Especially once I discovered that some classes can become a higher class once they reach level 10 (using a special item which there are a limited number of). Generally this also means you get to use two weapon type’s instead of one which is a huge advantage. This gave me an extra incentive to include certain characters. Sadly you can’t reach a third tier, which in my opinion would have been a nice addition. Another feature I really appreciated is the large cast of characters you can recruit / that can join you. These can also die in battles (except the main character) which I liked as it makes losing units in a battle actually matter. I ended up losing about ten characters during the game (although I did reload if I lost the most important one’s). Oh and at the end you get an overview of each character, showing what happened to them after the war. And naturally if they die, you don’t get that. Finally there are items. These can be bought in shops (there’s also a secret shop) and found in maps / gotten from characters. There’s a good diversity (with even some epic weapons) and as weapons can run out of charges there’s an incentive to diversify what you are using. Most of my units ended up carrying around 4-5 different weapons to use against different enemies. Tip: Make sure to stock up on the Javelin’s / Hand Axe’s as they are very useful to get free hits in from two range. 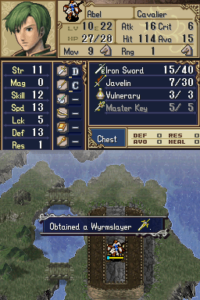 Every map is basically a scripted puzzle. It has a set number of enemy units that only move once you get in range, a number of enemy units that immediately go for you and possibly a number of enemy units that will spawn at set times from set points. The challenge to finishing the map is figuring out which units to use against which enemies and where to send your units in which order (which all in all is still enjoyable). The AI meanwhile simply attacks you if you are in range and if not, moves towards your units predictably. The highlight of the AI is that it’s pretty good at determining which of your units is weakest and pretty consistently goes for those. Finally the boss of each level: They just stand at the exit until you are ready to kill them with 5-6 units at once (some even can’t hit you back as you can just hit them out of their range). This felt pretty anti climactic (except for the last boss, who could one shot most of my units).

Character depth could have been better
There’s a feature to reclass your units into different classes. I can understand that such a feature can be fun for people who want to replay / min-max the system, but for me who was playing a story it was immersion breaking to be able to change my clerics into whatever class I wanted at will (which naturally I didn’t). A minor annoyance was that only the main character can take the final objective (which can mean a number of turns waiting for him to get there, although that does make sense story wise). My other major annoyance were some of the conversations between characters. These are pretty often very silly / inane. Especially the recruitment conversations which often made both sides of the conversation appear as idiots. I feel they could have done more with these, add some more realistic interactions or simply more meaningful writing. For me the characters came more to live through the static animations between the levels, which is a pity.

As I said in the beginning, if you like tactical rpg’s, you’ll want to play this as it’s mechanics are very solid and you should enjoy it. If you are unfamiliar with the genre it is a good entry title to try the genre as it’s very well polished. Don’t expect a very interesting story or very in-depth developed characters though. Note: The game also has online play which I haven’t tried out (nor does it work on the emulator). Oh and when finishing up this review I discovered some of the other Fire Emblem games are considered to be much better so you might want to try one of those first.

Here’s a Youtube playthrough on the highest (!) difficulty level: