Gunnerkrigg Court is one of those web comics which is very easy to recommend. It combines great art with very creative story telling and is set in an extensive science-fantasy universe. It’s been going on since 2005 and has 49 chapters (1400+ pages) for you to read. I’m at page 1442 at the time of this post. This will be a pretty short review (a spotlight), for an in-depth review check out in example this review. Also, don’t be too scared off by the not as good art in the first few chapters, it improves pretty quickly. 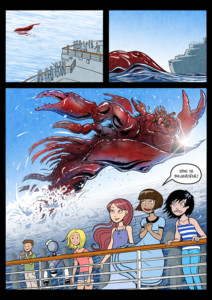 What I liked
– The author (Tom Siddell) manages to present a pretty big cast of very diverse and interesting characters. Pretty much everyone has an unique ability and each character is fleshed out much more during the story (partly through flashbacks). My favorites are probably Zimmy and miss Jones although Coyote is very deliciously evil.
– Part of this fleshing out is that the characters are evolving during the story and their relationships change. There is real growth and some of the story is about relatively mundane things that the characters are doing. These chapters are still interesting though, mostly because of the inventive idea’s that are used for these chapters. For instance chapter 10 is a black & white class, which ends up the characters enacting the basic plot of a very old sci-fi movie.
– All these side stories also help to really flesh out the world as a very interesting place. There are two opposing factions. The technology oriented Gunnerkrigg Court and the nature / magic oriented forest. This combination of technology and magic allows for pretty much every possible conceivable thing to be possible in some way or another. Which Tom then uses to prevent the story from becoming predictable / boring.
– Finally I feel Tom combines these aspects well together. It’s a complex interwoven web of stories / characters and events, but it doesn’t really become overwhelming due to there being a specific focus in each chapter and a very gradual build up in the overall story.

In short: This is one of the comics I’m checking whenever there’s a new update. Here’s the RSS. Oh and if you want some more backstory, Tom’s Youtube channel has a playlist in which he talks about the chapters.