PinOut is another game from Mediocre which I can highly recommend you try. It’s an ‘endless’ pinball action game with a neon graphics style and retro music. Do not expect a serious pinball simulator, as it’s very fast-paced and not too difficult / complex, but it does do that very well and is fun to master. I played the Android version (1.0.2) on my phone and it can be played for free just like their previous game Smash Hit (you can optionally pay 2-3$ to enable checkpoints and support the developers). It’s also available on iOS. 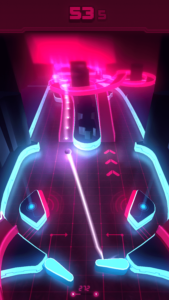 How the game works, is that you start on a board (with two flippers and a ball) which has one or more exit paths to the next board. If you hit the exits, you fluidly move on to the next board and if the ball goes between the flippers you go back to the previous board. It’s all one long sequence of boards in which the game can only end when your time runs out (you start with 60 seconds). You can mainly get more time by hitting glowing white dots which are not available on each route you take, so you have to aim carefully. Once in a while you then hit a checkpoint which is basically the entry point to the next level as after each checkpoint there are different challenges, mechanics, music and art style. This is where the game excels as there is good variety between the levels. They play quite differently and each presents a different challenge so you need to adapt to the level you are playing. Eventually you will hit the endless mode and there you can keep playing until you run out of time (how far up you got determines your final score).

As I said in the start the game play itself is pretty simple and fast-paced, so you shouldn’t expect to spend more than 5-15 seconds on each board (if successful). Another example is that I’m pretty sure that the game compensates if you slightly miss an exit shot, probably to prevent players from getting too frustrated. 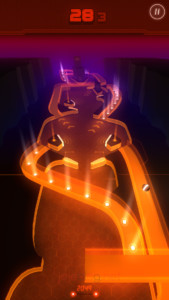 Personally I didn’t mind this too much as it gave me a real feeling of being able to quickly progress, although sometimes it can be annoying as some of the boards are pretty open and have shortcuts you end up not hitting due to the game defaulting to a different path. Another nice touch is that the game has four mini games (there is one very cool hidden mini game even) which can occur when your ball hits a certain item; that’s something else to aim for. These mini games are simple, short and fun (and give you bonus time!). There are also items to pick up that give you the choice of two power ups (where the items are and what choice you have seems to be fixed). These can give you a decent variety of useful powers (i.e. random power up, warping ahead, time slow, doubled time bonuses, etcetera). Note: One of these power ups, the one that lets you redirect the ball manually, is pretty broken. Time stops when you are aiming where to go next, so you can use it to advance half a level without any risk gaining about 100 seconds in that process. Hopefully that will be fixed in a later version.

The difficulty level is pretty easy (especially if you use that glitch). There are many ways to gain extra time and because the levels are fixed each time (even power-ups it seems) and aiming is relatively easy I quickly made progress. All in all it took me about 15-20 attempts before I managed to finish the game. I did this without using the checkpoints which I wanted to do because there’s an achievement that awards you for finishing the game in one go, which is nice ;). 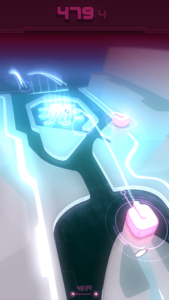 All in all the achievements were pretty good; not too many, lots of points & relevant goals that are set. A nice touch is that you can share your score with other players. Reflecting on the very short time I played it, I guess one criticism I’d have is that it was a bit too easy / short for my taste; it could have done with a few more levels / bigger levels / an optional higher difficulty / maybe a few different modes. I probably won’t play it too much in the future, but that’s because I tend to move on to the next game.

If you are having trouble with the game, here are two more tricks that might help you: When passing to a new level it can be worth it to let the ball fall back to the previous level immediately as passing to a new level gives you 25-35 seconds bonus time and often there are two different paths you can take. So you can collect the bonus again. Another trick is that it is really useful to hold the flippers on certain boards. This will almost always cause the ball to come to a complete stop so that you can aim it carefully. And on some boards the price of a mist shot is that you fall back 3-4 screens which costs so much more time. As a final note, I’m generally not very perceptive of how good the music is in a game, but in this game even I noticed that the music at times was excellent. The second level especially had a song that really stood out of me when it started. All in all, this is a game I can highly recommend to give this a spin.